According to the NZ Companion Animal Council about 64% of NZ owns a pet. But having an accommodation where you can be with your furry friend can be hard to find.

More than half the homes that don’t currently have a pet would like to have one, the data from 2020 shows that the biggest barrier in pet ownership is that the home is not suitable (37%) and nearly a third of respondents were in rented accommodation that did not allow pets.

There are two main reasons landlords give for not allowing pets

Barfoot & Thompson looks after more than 16,000 properties across Auckland, out of which 13.9% allow pets. As per the latest report March 2022, North Shore and Rodney areas had the highest proportion of managed properties that allowed pets, with 23.4% and 22.3% respectively.  Central Auckland lags behind all other regions, with only 1.5% allowing pets, though with a higher proportion of apartments, this is not surprising.

Five years ago in March 2017, 12% of Barfoot and Thompsons rental properties allowed pets, so it would seem more landlords are warming to the idea of pets in their properties.  With higher rental returns from allowing pets, the risk of damage can be partially mitigated.  Currently for a 3 bedroom property the average additional rent is $20.33 per week (netting around an extra $1000 per annum), and a 5 bedroom home, $34 per week ($1768 per annum).

Research from around 16,000 properties managed by Barfoot and Thompson. 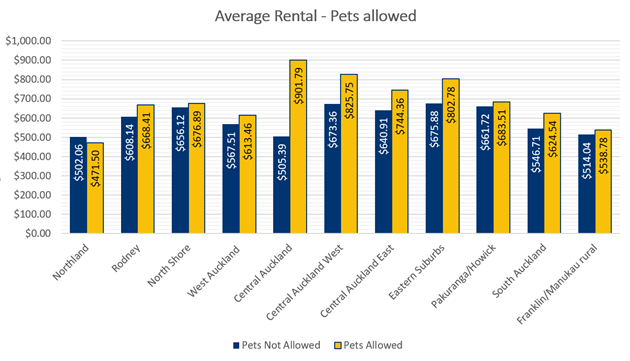