Causes of higher house prices since 1992

Interest rates have been structurally declining since 1988 and received an extra exceptional push lower in 2019 and 2020 as a result of surprisingly low inflation and then the pandemic. That change has now ended and while we are not headed back up to old interest rate levels we are heading into a period of contractionary monetary policy. The trouble is we don’t really know the neutral (average) level for interest rates any longer. Only hindsight in perhaps 2024 will tell us that. 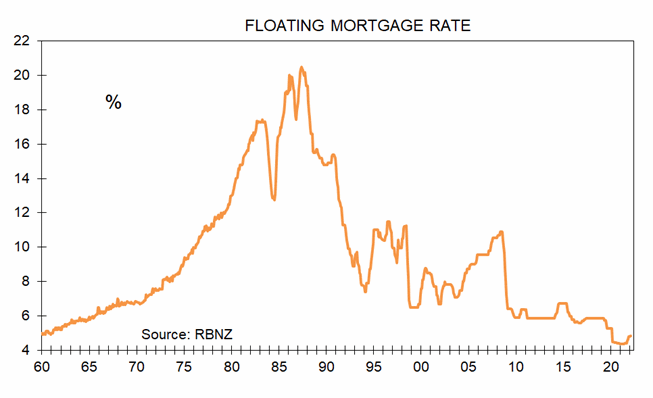 So, be careful not to fixate on any particular forecast for where rates are headed. You don’t know what is going to happen in Ukraine and neither do I. Same goes for China’s Covid strategy (hitting supply chains).

But do note that as the world retreats from the degree of globalisation which we have become used to, productivity growth will slow, and this will add to inflation. That implies higher interest rates on average beyond the simple ending of the three and a half decade rates decline. That means some further reduction in the average annual pace of house price rises.

Since 1992 average house prices in New Zealand have risen by about 7% a year. In Auckland the gain has averaged near 8% a year. My view has been that from here on out the average will be about 5%. I feel more comfortable with that view now that the pandemic-related price boom has ended.

Here are some of the factors which help explain why house prices have risen by so much in fits and starts since the early-1990s. Where relevant I note if the factors are now turning in the opposite direction, as already noted for interest rates.

Prepare for retirement or die in poverty

People have been actively seeking assets to fund their retirements because governments and forecasters since soon after the 1987 sharemarket crash have been warning of fiscal devastation from the ageing population somewhere down the track. The strong message to people has been to build personal wealth, and many people have chosen successfully to do that through property ownership.

The country was opened to many more migrants from the late-1980s, and these people naturally have wanted to establish a strong home base and also build their wealth. Many have come from countries where trust in assets other than property has been or is low. The government has now however indicated its intention to reduce migrant inflows and we have seen foreign buying of houses banned since late-2018, apart from Australians and Singaporeans. Our population growth rate accelerated for a while due to smaller net annual losses of Kiwis offshore. But a strong net flow of Kiwis outward is now in the offing, encouraged firmly by the strong labour demand across numerous sectors in Australia. Nuclear submarines, missiles, renewable energy, and etc. down a very long list. The female workforce participation rate has risen over time. This has boosted funds available per average household which can be allocated to purchasing a house and contributed to the situation we have now where most people feel two incomes are needed to purchase a house. It used to be one. Those incomes after adjusting for inflation are now taking a hit and that will naturally reduce housing demand.

Credit availability boomed from 1984 when the economy was deregulated. Now, credit controls are much tighter.

Lack of productivity growth in the home building sector means construction costs have continued to rise at a pace not seen in most other sectors. Those costs are receiving extra upward pressure now and this will be a factor strongly offsetting the downward pressure on house prices from most other things being listed here. Every year seems to bring not just higher material costs but tougher rules from both central and local governments regarding how to build a house and what standards it must meet. All of the energy, health and safety, materials testing, inspection etc. regulations add to costs. It is impossible to imagine anything other than that extra rules will continue to flow and extra costs will still be added to building a house as people promoting higher home quality sacrifice home ownership and access for young and poor people.

Urban planning’s rise as a discipline and the turning up of noses at urban sprawl has led to tight regulations on where houses can be built. Lack of land has pushed up section and section development costs (infrastructure) and this has been a big contributor to higher house prices.

This simple graph shows the ratio of the average nationwide section price to the average value of a dwelling consent. It has risen firmly over time despite soaring costs related to materials, labour, and compliance, alongside larger average house sizes up until recently. Now, much more land is being made available and intensification in particular is being facilitated. There is in effect an over-supply of developable land now in our major cities and only just this past week have we started to see people realising what this means for section prices. When supply booms, price falls – especially so if demand is falling at the same time.